Chapter One: The Blind Leading the Blind 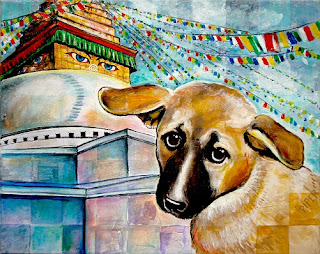 Mauka maa hira fornu.
(When there is opportunity you have to be ready to break a diamond)
-Nepali Proverb

It’s around 4 a.m. and still dark when we see the strikers on the highway, setting up a barricade to stop people from getting to the airport. We left the Boudha area of Kathmandu early, 3:30 a.m., in order to beat the strikers, but they’re already up, preparing to shut down the city, and the whole country of Nepal, for another day.

If the strikers stop us, they’ll likely pull me and my dog out of the car, vandalize or burn the taxi, and thrash our driver Deepak. This is how they force people who don’t believe in their cause to honor their strike, known here as a bandh.

In a big photo-op show for the news cameras, the leaders of this latest in a series of bandhs had promised not to stop ambulances, school buses, tourists, journalists, rights workers or delivery of food and other essentials. The next day, they promptly stopped ambulances, school buses, tourist buses…well, everything. They beat journalists and taxi drivers and chucked tourists into the shuttered streets. So far, just one death has been attributed to the strike, a 62-year old man who died of an asthma attack when the bus he was on was stopped from going to the hospital. Nobody knows how many sick and elderly are dying in small rooms or villages somewhere, unable to get medical help, or, for that matter, clean water or food.

There is no reason to think they’ll spare us.  Brave Deepak will bear the brunt of it.  As a foreigner, I’ll probably get off lightly, forced to walk the last two kilometers with a suitcase, a computer bag and an 11 kilo dog in a carrier.  If we don’t get this flight to Bhairahawa, a town near the Indian border, we’ll be stuck in Kathmandu for God knows how long. Nobody knows what’s going to happen here, where the anger is deep and impossible to satisfy. Numerous groups are striking nationwide, with opposing demands for inclusion in the constitution. Appeasing one group means angering others. It’s the mother of all Mexican Standoffs.

A Nepali friend believes once the anger is expressed, things will drift back to what passes for the New Normal here—an uneasy peace with occasional explosions of violence. Others are much more pessimistic. “Civil war,” says a shopkeeper in the bazaar. “Like Hutus and Tutsis,” says a college student, who notes that it’s only been six years since the end of Nepal’s bloody civil war.

I lean towards the first theory, things will drift back to Nepal’s “New Normal” eventually, simply because this is a very poor country and people need to work or else they starve. But I’m not a Nepal expert. Staying too long means, at best, a hefty fine and other expenses I can’t afford, growing food and water shortages, and more violence in the streets due to the escalating strike. Oh, and the rains are coming to ground flights and wreck the roads, which have a terrible reputation in the best of weather. If it was just me, it wouldn’t matter. I’ve been in worse jams. Now, however, I have this dog, Alice, and I need to get her out of here to India, and from there, inshallah and the creeks don’t rise, home to Canada.

“Problem,” I say to Deepak.

“No problem,” he says, and smiles.  He assures me he is “expert” at bandhs. Does this all the time.

As we approach the strikers, Deepak floors the gas pedal, whizzing between the unfinished barricades so fast the strikers’ heads must have spun 360 degrees. When we’re safely past them, he laughs and I exhale. It’s clear to the airport.

We’ll be flying a Buddha Air turboprop into the Terai, a region where a hardcore strike has gone on for weeks, leaving thousands of tourists, pilgrims and trucks trapped on the Nepali side. When we get to Bhairahawa, I'll ditch the dog carrier at the airport to walk four kilometers to the border crossing in the hot sun, if strikers don’t stop us. Alice will have to be carried for much of it to protect her from stray dogs. I’ll also be schlepping a small wheeled suitcase and a computer bag, most of my worldly goods. I couldn’t buy a folding luggage cart before I left Kathmandu, but I did manage to get an elastic rope with hooks. I plan to fasten the handle of the wheeled suitcase to the back of my trousers so I can drag it, and throw my computer bag over my shoulder, leaving both arms free for Alice. A practice run in the hallway at my guesthouse didn’t go well, but I figure if I position the dog and the computer the right way, as ballast, their weight will pull us forward and ease our burden. If not, I’ll have to ditch the suitcase.

I picture it being a very long march to the border, with many stops for rest, shade and water. At 54, I am too old for this.

I’ll worry about that later, adding this to a long list of things I need to worry about later, like how Alice, who has heartbreaking separation anxiety, will handle her first flight, and where to find a cheap hotel that’s clean and accepts dogs if we get to India, and getting the dog and I on a train or trains or buses to Delhi, and where we’ll go from Delhi, and what we’ll do when my Indian visa expires, and how the hell am I, a cynical,  impoverished, and itinerant writer who hasn’t had a book out in six years, going to support this pup. I’m a stray dog leading a stray dog to God knows where.

It’s scary how much she trusts me.


Next: Nepal, the Practical Option

(Alice by the Stupa copyright 2012 by Kathrine Piper)

If someone had told me, even six months ago, that I’d be writing a dog memoir, I would have marked them off as drunk or clueless, or both, and said, “Not gonna happen. There’s no way I’ll end up with a dog, let alone write a book about a dog.”

And here I am, with a dog, writing a book about a dog.

Most of the notes I took at the time of this story were To-Do lists along the lines of:

Get Pup to walk all the way to corner

I’m grateful to the people who shared the adventure and helped jog my memory and fact-check the story. All errors are mine.

Alice was a street dog, a puppy, in Kathmandu when she rubbed up against writer Sparkle Hayter in a tiny lane near the great Boudhanath stupa, one of Buddhism's most sacred places. Since then the two of them have been on an adventure through strike-torn Nepal into India, hopefully on their way back to Sparkle's home, Canada. Alice has travelled by plane, train, taxi, cycle rickshaw, auto-rickshaw, tonga, and in Sparkle's arms. You can help by donating here:

Sparkle Hayter is a writer and journalist. Her website can be found here.